7 Things You Didn’t Know About Albury 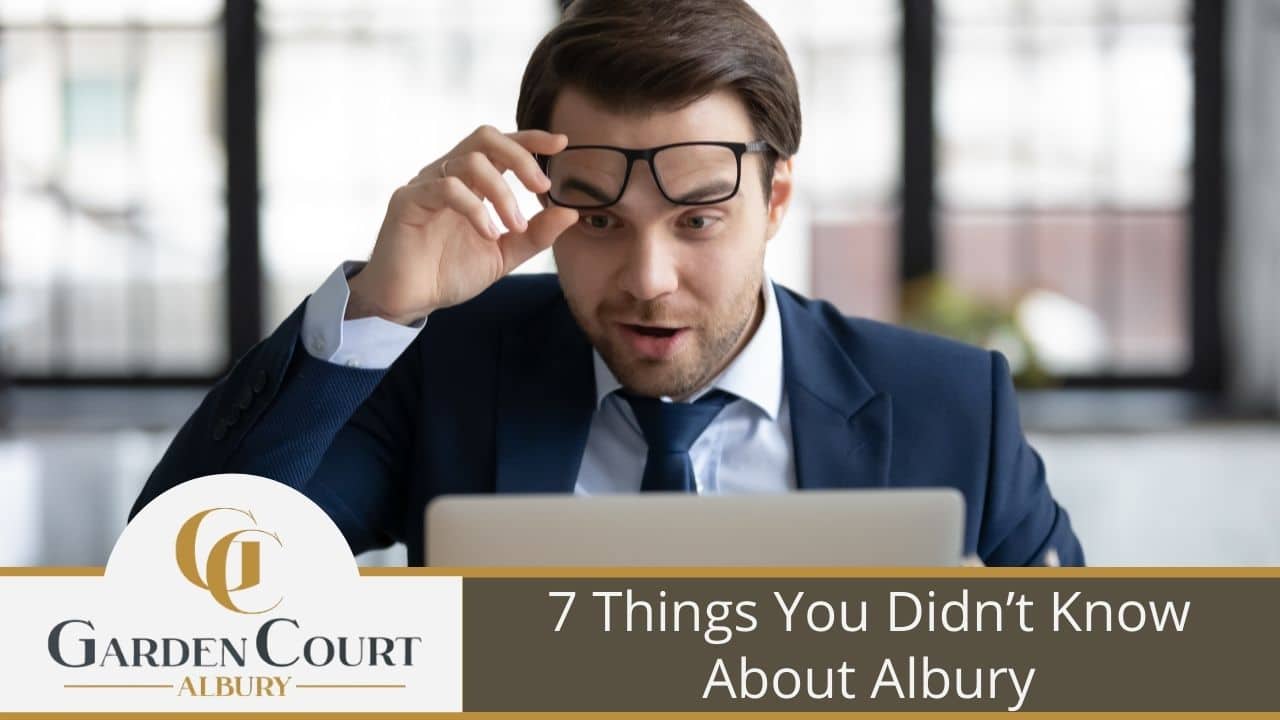 Albury is a place that blends small-town relaxation with all of the convenience of a big city and is the perfect destination for those wanting to enjoy the richness of culture and adventure that New South Wales has to offer.

In Albury, you can experience the great outdoors, award-winning food, world-class sporting facilities, luxury spa retreats and family attractions such as the enchanting Children’s Garden at Albury Botanic Garden.

At Garden Court Motel Albury, we are proud of our city and want to share our heritage with visitors to the area. From Albury’s name changes to the history of our long-standing railway station, here are 7 facts that you didn’t know about Albury.

1. Albury Has Had Other Names

Albury Was Formerly Known As Bungambrawatha, which means ‘homeland’, and the place was named by the Wiradjuri people who had lived on their land for many centuries before the area was settled by the Europeans.

The region’s name was later changed to Albury in 1838 so that European Settlers could pronounce it more easily. As a result of European settlement in Albury, the Wiradjuri people tragically lost much of their land and hunting grounds.

2. Albury is Home to A Huge Lake

No trip to Albury would be complete without experiencing the breath-taking views at Lake Hume, which is 6 times larger than Sydney Harbour. Only a 15-minute drive from Albury’s city centre, Lake Hume is perfect for a day relaxing by the water, fishing, swimming, water sports or barbecuing with family and friends.

Hailed as an engineering triumph, Hume Dam was built between 1919 and 1936. With views looking out over Lake Hume to the east and the River Murray to the west, it makes for the perfect backdrop for your holiday photos using one of the viewing platforms along the wall.

The Gardens were originally designed in the shape of a Union Jack, but the layout of the straight paths and shrub beds later became curved to give the garden a more relaxed appearance. Throughout the years, Albury Botanic Gardens has won multiple awards for its layout, planting design and annual floral displays.

The opening of the Albury Railway Station was a momentous occasion and was seen as a turning point for the region as the first rail connection between New South Wales and Victoria.

The heritage listed railway building was designed by John Whitton and was constructed between 1880 and 1881. Passengers or goods passing over the NSW/Victoria border by rail had to stop at Albury Station to change trains, making it a bustling hub for travellers. To this day, Albury Railway Station still serves as a vital link for locals and tourists travelling between Albury and other major cities such as Victoria or Melbourne.

5. …How the Murray River Got Its Name

The settlement of Albury happened on the 16th of November 1824 when explorers Alexander Hamilton Hume and William H. Hovell first came upon a crossing point on the River. As a memorial to Hume’s father, they named the River Hume in his honour. The next day, they marked a tree with the name before continuing on their journey to Westernport in Victoria.

In 1830 Captain Charles Sturt came across the River Hume on his explorations and unknowingly named it the Murray River. While both names were used for the river, the local population now refer to it as the Murray River.

Albury-Wodonga is also known as The Twin Cities with the two regions geographically divided by the Murray River. Albury is located on the north side of the river in New South Wales, while Wodonga is located to the south in Victoria.

The Albury-Wodonga area serves a regional community in excess of 180,000 and is a major hub for jobs, shopping, education, recreational activities, entertainment and cultural services for residents of the area. The two communities are committed to working together so they can plan, develop and grow the Albury-Wodonga region.

Albury has held horse racing events, which were among the first organised sporting events held there, since 1845. The first Albury Cup was held in March of that year, with horses from Melbourne and Sydney participating in the race. The race was conducted at Browns Paddock which stretched from the Hovell Tree to the rotunda in the Botanical Gardens.

In 1881, Albury Racing Club was established and remains as an iconic venue for the city of Albury. The club offers attendees modern facilities and services and is home to thoroughbred racing and a host of other events.

Need A Place To Stay While Visiting Albury?

We know that the accommodation you choose can make or break any getaway in Albury. Garden Court Motel, however, prides itself on having a wide range of rooms designed to suit any requirements or budget.

Whether you’re a business traveller or visiting with family, at our luxury motel in Albury you will be welcomed with plush bedding, clean, spacious rooms, and a cosy atmosphere to make sure you have a good night’s sleep and a great time in Albury.

To get more information about the rooms and services we offer give us a call on (02) 6021 6244 or email us at info@gardencourtmotel.com.au, alternatively, you can book a room directly on our website and receive a complimentary continental breakfast.